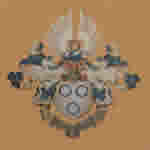 This picture shows the crest of the Arntz family in Belgium. Its composition is in line with the general description of the Arntz crest (see {cms_selflink page=’home’ text=’Home Page’}), but it is unclear why different colors are used (i.e. blue instead of red and white instead of gold).

In the middel Ages heraldry came into use as a practical matter. It originated in the devices used to distinguish the armoured warriors in tournament an war, and was also placed on seals as marks of identity.

As far as records show, true heraldry began in the middle of the 12th century, and appeareed almost simultaneously in several coutnries of Western Europe. 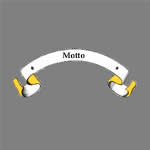 There are two known mottos for Arntz: ‘ut viva vigila’ (watchful so that I may live) and ‘vincet labor’ (labour conquers).

The motto of Arntz in Belgium is ‘vincet labor’.